I’m pretty sure about one thing: nothing that is being said out there about leadership is true. Leadership or the actions of a leader are completely subject to everyone’s interpretation, viewpoint and opinion.I think that there is some common sense around the theme, but nothing that can be written on the stone.

I will assume that everyone knows what a meme is. Leadership can be anything except a meme. I think that it can’t even be represented by a meme. And when I refer to meme, also I mean these images that get viral, with a “canned food style” content that many people share on social networks without even analyzing what in fact they are sharing.

The market is not the most merciful places I know: it only takes misplaced post and a whole career can be lost. For example, before I bring my readers any content, I always think, rethink, almost yeast it and then I reread it again and in the end, a lot of what I write does not win the world. Because? Because like any normal person, sometimes I write poor content that my common sense prevents me from posting.

Now let’s take a look at the picture that has been shared. It has two columns, but instead of “leader x boss”, I see two columns with important qualities to every leader: 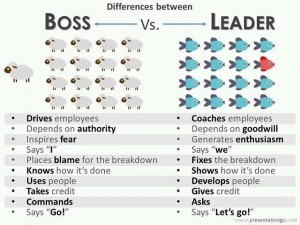 Confusing? It is a nice picture. With a really nice message… But let’s get deeper.

The other side of a Coin

All qualities may appear as defects, depending how you look to it. The boss column above can weave different interpretation of everything that is there. Let’s see how I see it:

I saved the last one … Because we need image interpretation now. This image does not translate for me the concept of you will or we will.

Gestalt psychology, in a summary that psychologists might hate me for, is the branch of psychology that study the interpretation of images. I read Gestalt Psychology eventually and I recommend everyone do the same.I do not consider the above image consistent with any consistent representation of leadership.
For me to explain how I see this picture, I will need an expanded universe:

Thing seems to have changed. Where’s the leader now? What concept of leadership is that changes in the first challenge (in this case the wolf or the shark)? In the figure above: would the sheep ahead the flock to be a hero or the fool who led the team to fail? And for the red fish? Would it be a coward who hides amid the team to not face the problem alone?

The leadership is often a lonely place.

Regularly, a manager is faced with situations in which we must do very difficult decisions. Cut staff, to fire someone, take some risk to grow or keep it safe and ensure the team a sweet spot in the sun. Often the leader has to align staff and company goals and it is not rare that both have completely opposite goals. In this case, he, the leader, is the only one wanting this alignment. The leadership is often a lonely place.

Being leadership a lonely place, only the leader knows what he’s going through. The leader often does not do what he wants to, but rather he does what must be done. Luckily, one can work to make this position less lonely. How? When the team has enough capacity to get the job done.

A more mature team tends to be technically distant from the leader (no senior professional wants to be micromanaged) but may be closer in terms of general relationship. A Senior Developer can collaborate better and make the Development Manager’life easier when the senior helps the fresh ones to decide deadlines, by take part of the their  technical training and etc.
The picture below may be challenged, but I believe that every leader must one day do this with his team, for the sake of his own team:

In this picture, is the leader a coward worse than the one some pictures above? Or is it a coach who watches how his team deals with a problem and help them to improve? In this case he would not be showing how it’s done: he can do and is there to correct how the team is doing, as it is solving a problem. A coach does not gets to the field during a match…

The human being needs to be challenged. They must be charged to grow. It was falling we learn to balance in order to walk. A team under the supervision of the leader, is subject to various situations and guided problem solving, will one day improve about to become greater than the problems it faces. Or:

Among several concepts of leadership that I know, one that I like the most is “leadership is to getting results” and most noble of these results is team development.

So forget memes: they are canned knowledge ready for easy digestion and may hinder a broader and more complete interpretation of anything. It is true that a picture is worth a thousand words. These thousands are always few to describe the many interpretations that are made one particular image. The most important thing should always be how we assess the situations and conditions and only that should define what is our best behavior and what we must do. Descartes once said:

Common sense is the most fairly distributed thing in the world, for each one thinks he is so well-endowed with it that even those who are hardest to satisfy in all other matters are not in the habit of desiring more of it than they already have.

This work is licensed under a Creative Commons Attribution-NonCommercial-ShareAlike 4.0 International License.

About rftafas 183 Articles
Ricardo F. Tafas Jr graduated in Electrical Engineering at UFRGS with focus on Digital Systems and achieved his Masters also in Electrical Engineering on Telecomunications Network Management. He also author of "Autodesenvolvimento para Desenvolvedores (Self-development for developers). Ricardo has +10 years experience on R&D Management and +13 years on Embedded Eystem Development. His interest lay on Applied Strategic HR, Innovation Management and Embedded Technology as a differentiator and also on High Performance Digital Systems and FPGAs. Actually, he is editor and writer for “Repositório” blog (http://161.35.234.217), editorial board member at Embarcados (https://embarcados.com.br) and he is Management and Innovation Specialist at Repo Dinâmica - Aceleradora de Produtos.
Conectar com: